In this article, I’m going to briefly review the top Lego Formula 1 sets. I will review four Lego Speed Champions F1 sets, three Lego Technic Formula 1 sets and two Lego Racers Formula 1 sets. Even if two of them are marked as “Lego Racers” sets, I still consider them being Lego Technic models because they are built with parts that are specific for Lego Technic. Just have a look on the images below and I think you will agree with me.

You might also like to check out my other article in which I’m listing the current best Lego car sets that you can buy – if you like cars too.

So now let’s continue to the reviews: 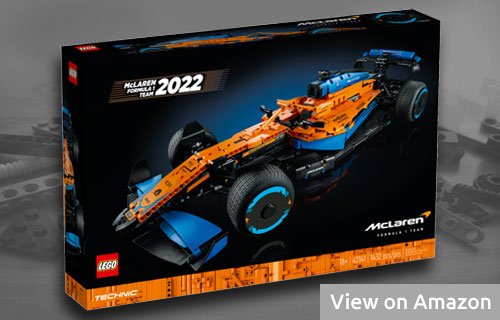 The first set on my list is a Lego Technic set, McLaren Formula 1 Race car. Being released in 2022, it is the newest set from this list. It is an 18+ Lego set, so we can call it an adult Lego model. The main features include: working suspension, steering, and V6 engine with moving pistons. Also, it was developed in collaboration with the McLaren Racing team. The model consists of 1,432 pieces. Most of them are blue, orange and black in color. Personally, I really like this set. Especially, because I like the real McLaren Formula 1 race car’s design too. If you are a Formula 1 or race cars fan, and you like Lego Technic too, I highly recommend you this Lego model. 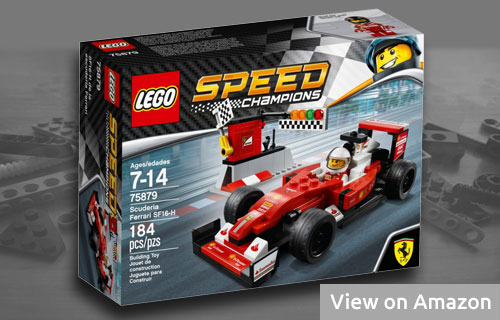 This building kit contains the typical Ferrari car which you can see in Formula races. The set introduces a start-finish line, minifigure and the car itself. It is suitable for children from 7 years and it is easy and fast to build as it has just 184 pieces. The set has two race numbers which you can swap and pretend that there are more drivers. It also contains other accessories like helmet or walkie-talkie. The racing car has all the authentic details which you can see in the real-life races. 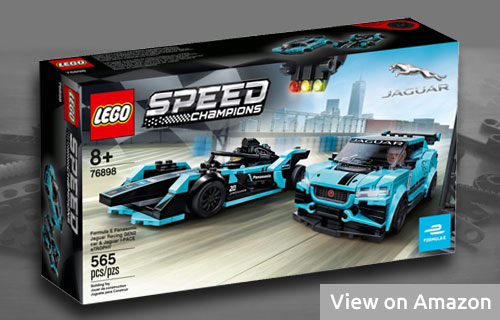 In this set, there are two electric racing cars in the traditional Jaguar blue color. It introduces two replicas to us – Formula E and I-PACE car models. Both are exciting electric car models with which you can recreate car races. This kit also contains a start and finish gate and two minifigures. It was built in cooperation with Jaguar manufacture and it is made perfectly with all the details. 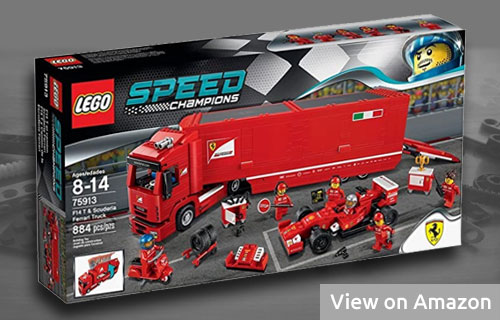 If you are really a fan of the Formula races and if you want to recreate the whole atmosphere of the races, this set is what you need. You will find multiple Lego minifigures, the huge team truck, the racing car and many more accessories of the team in this building kit. There is really a wide variety of accessories like drill, oil can, screwdriver, hammer, and others. You can recreate everything what is happening just after the car enters the team box – changing the wheels and repairing the car. This set contains 884 pieces. 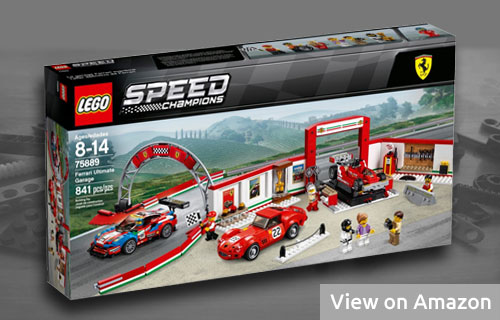 This building kit should recreate the atmosphere of the museum of Ferrari garage. It contains seven minifigures like drivers or visitors, three Ferrari cars – one of them is historic 312 T4 car, a building in which you can find a fuel pump, tool rack and you can display the Ferrari car in there and furthermore the racetrack arch. With all this, you can recreate the races but also a workshop or museum. You can easily remove the windshields of the Ferrari to place the minifigure inside the car. As it is made of 851 parts it is perfect for all children from 8 years. 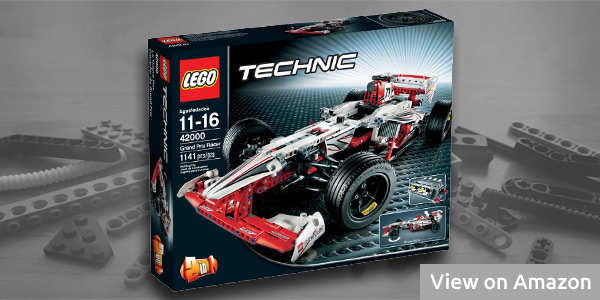 This Lego Formula 1 building kit was released in 2013. It contains 1,141 parts and is targeted for kids of the ages 11-16. The parts color is gray, red and black. The model features a V8 engine with an opening cover, adjustable spoiler and suspension on all wheels. This Grand Prix Racer model can be motorized with the Lego set 8293. The second model that can be built with this set is a Race Truck. The dimensions of this model are 4 x 24 x 9 inches (12 x 61 x 25 cm). 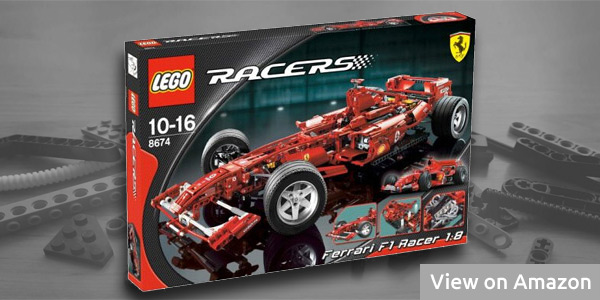 This is a little older Lego model from 2006 and in my opinion it still looks great. Maybe even better than the set above (the Technic Grand Prix Racer), especially because this one is actually a Ferrari. Most parts of this Lego Racers F1 set are obviously red (as of the Ferrari color). It has a steering mechanism that works and more or less the other features are the same like on the model above and below as well (e.g. the V10 engine). The size of this model is in the scale of 1:8 of a real F1 formula. Note: If you are looking for Lego Technic Ferrari cars sets, check my other comparison article: Lego Technic Ferrari Cars Sets. 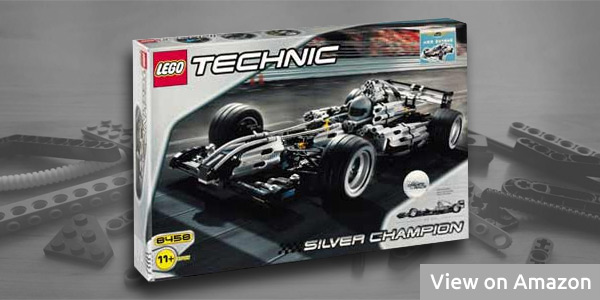 This is another Formula 1 Lego Technic set. It was released in 2000 and the set contains 1,413 parts. The features of this model are similar to the other Lego models reviewed in this article, so I’m not going to mention them again. However, what is great about this set is that there are totally 3 alternative models for this set and they all look pretty cool. So besides the Formula 1 Silver Champion you can also build a Silver Truck (which is the second official model, 8458-2), Street Sensation and a Silver Sportscar. I must admit that I really like this sportscar model (you can see it & find the building instructions here). So if I were deciding to buy one of the sets from this list, I would probably buy this one or the Ferrari set mentioned above. 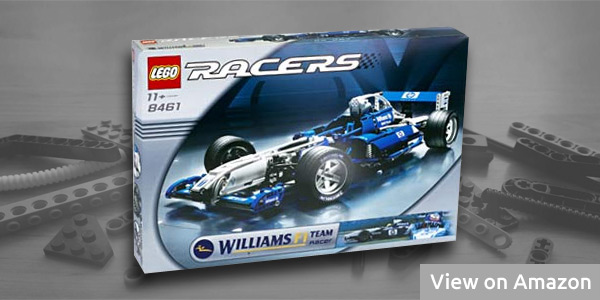 This is another Lego Racers Formula 1 set from 2002. It contains 1,484 pieces. Most of the pieces are white, blue & black. It is a model of the Williams F1 team. The functions of this set are mainly the same like those of the sets above. This set has no any B model, but you can build the B model of the 8458 set (the Silver Champion Lego set mentioned above) with this set, too. So if you buy this model, just search online for the instructions of the 8458 set. You can find them for example here: Lego 8458 Instructions.

So which one of these nine Lego F1 sets would you get? Or which one have you already bought? Feel free to let me know in the comments below what was your decision and its reason. If you are an F1 fan, I believe you would definitely welcome a Formula Lego set in your collection. 🙂

And if you wonder which one from this list I would choose, it would be the Speed Champions Jaguar Formula E & I-Pace because I really like this set. I like the fact that you get 2 models in it, a formula 1 race car and a Jaguar I-Pace SUV vehicle. The I-Pace is my favorite SUV car model.