In this article, I will review my selection of 8 best motorcycle Lego sets that you can currently buy. My choice includes four Lego Technic and three Lego Creator models as well. There are several small motorbike Lego sets too (e.g. Lego City) but I have excluded these from my list, except the stunt chicken bike. This list includes mostly larger & highest-valued motorbike Lego building kits.

Also, you might like to check out my other reviews of top Lego car sets if you like cars too. Especially, if you like sports cars and Lego Technic, because in this article, I’ve included several authentic Lego car models, like e.g. the Lamborghini Sián Lego Technic model.

Now, let’s get back to Lego motorbikes: 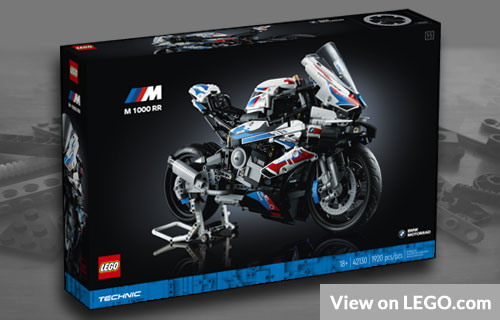 The first one on my list is the newest motorbike Lego set. It was released on January 1st, 2022. This special model is also the largest Lego Technic motorbike model ever produced. It is made in 1:5 scale to real model. The main features include a 4-piston engine, gearbox and suspension. The model is sold in the iconic BMW colors; blue, white & red. Same as the other BMW Lego set mentioned below (the R 1200 GS that was released in 2017) it was made in cooperation with the BMW team. This Lego model is a real masterpiece and would be an ideal gift for all motorcycle fans. It contains 1920 pieces and is recommended for the ages 18+. 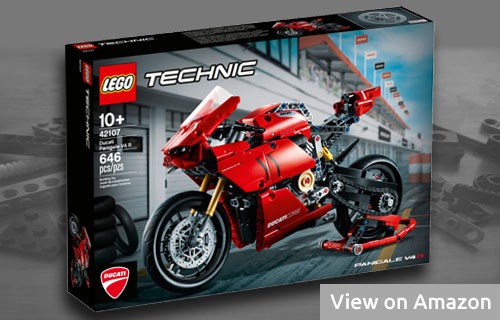 The second motorcycle Lego set on my list is a Lego Technic authentic replica of the Italian motorcycle Ducati Panigale V4 R. This building kit was developed in partnership with the Italian motorcycles manufacturer, Ducati. It is also the newest model on this list, being sold since June 2020 (from August 1st in the US). And since I love both Lego Technic and Ducati motorcycles, I have bought this model. You can check out my photos of it and also read my review of this Ducati motorbike Lego set. The main features include a dashboard, a windshield and an exhaust pipe. These small details bring the true sport spirit of Ducati to this Lego kit. It consists of 646 pieces and is recommended for kids who are 10+ years old. 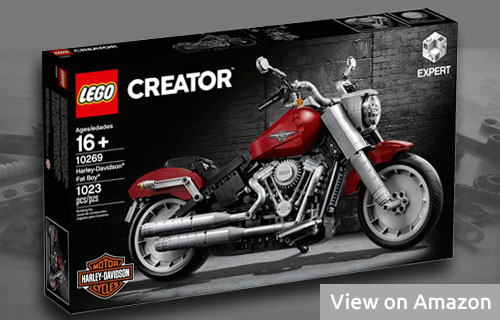 The third one on my list is a Lego Creator model, an outstanding replica of the Harley Davidson Fat Boy motorcycle. It comes in the authentic black and dark red color scheme. It also features the Milwaukee-Eight engine with moving pistons. Other features include a sturdy display stand, a kickstand, moveable brake levers and gear shift pedal, handlebar steering and dual exhaust pipes. The bike includes beefy tires and solid-disc Lakester wheels. The motorcycle model is 12 inches (33 cm) long and is recommended for older kids who are 16+ years old. 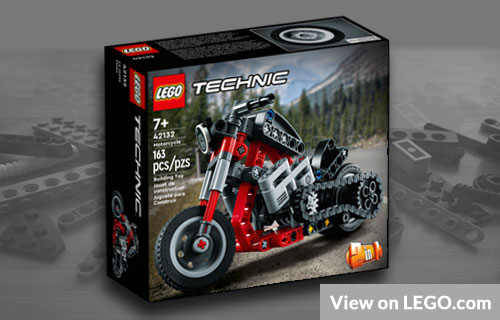 This building kit is a 2-in-1 set. Thanks to that you can build either Lego Technic motorcycle or an adventure bike. The model of motorcycle is well-detailed even though this set has just 163 bricks. This building kit is a part of Lego Technic collection, so there are all different technicalities such as a three-cylinder engine with moving pistons like you would expect. I would recommend it for small children as it is easy to build. The dimensions of the motorcycle are 6 inches (16 cm) long, 3.5 inches (9 cm) high and 2.5 inches (7 cm) wide. 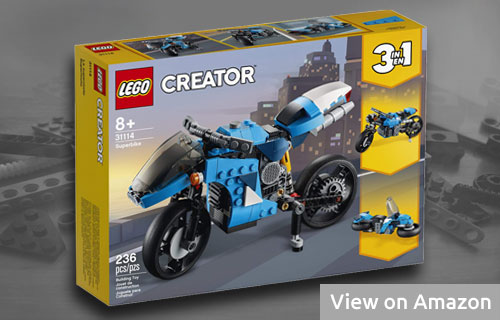 No one would expect so much fun with this kind of building kit. It is small. It has just 236 pieces, but you can build three different models with this amazing set. The creative Lego fans will like that you can construct a modern motorbike, a classic motorbike or a futuristic hoverbike just with one kit. It has astonishing features such as a working suspension or a kickstand, however it is not the most detailed motorbike. The dimensions of this Lego model are 7 inches (19 cm) long, 4 inches (11 cm) high and 2 inches (5 cm) wide. 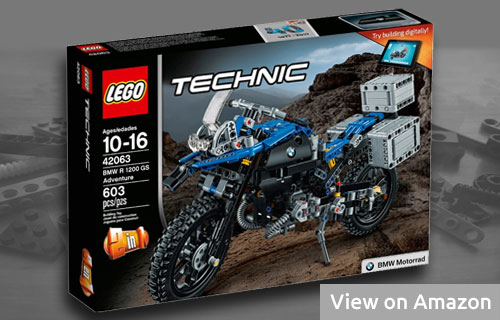 The fourth one on my list is another Lego Technic motorbike. It is an older set from 2017 and I own this model as well. I got it as a Christmas gift from my brother on Christmas in 2017. You can check out my own review of this set that includes some nice photos here: Lego Technic BMW motorbike review. And, I have reviewed the B model of this set as well, the BMW Motorrad hovercraft. You can check that one, too. It is very interesting, and it was designed by BMW designers. This Lego kit comes in 603 parts and is ideal for kids who are 10-16 years old, or for adults like me. Also, this Lego model includes a special 2017 Lego Technic 40 years anniversary brick (the Lego Technic theme was born in 1977). 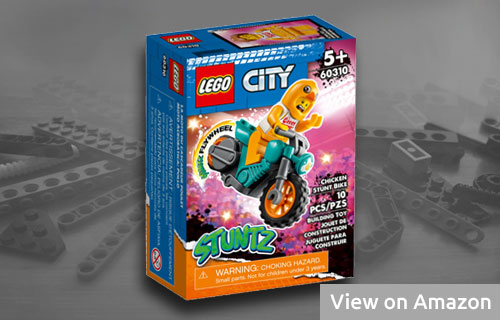 Are you searching for a perfect small gift for your children? Surprise them with this small set which includes just ten Lego bricks but will entertain them for long hours. The kit includes one Lego figure and a flywheel-powered motorcycle. They will spend a long time creating new stunts with this motorcycle. Moreover, you can buy other Lego sets like the Stunt Park so that you will enjoy even more fun with the motorcycle. The dimensions of this bike are 2.5 inches (6 cm) long, 1 inch (2.5 cm) high and 1 inch (2.5 cm) wide. 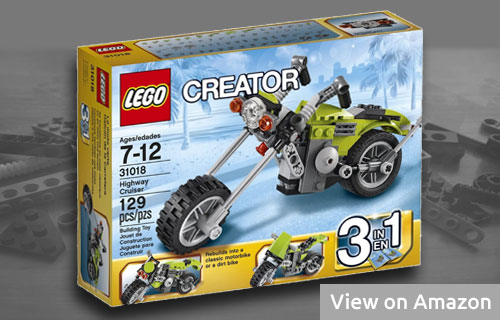 This smaller Lego set (it has 129 pieces) is the ultimate Lego motorbike model because it is a 3 in 1 set that can be rebuilt into a dirt bike or a classic motorbike as well. The main features of the main model, the highway cruiser, include a sleek bodywork, a realistic engine angled muffler, sharply raked front forks and twin exhaust pipes. The classic motorbike’s dimensions are: 6 inches (15 cm) long, 2 inches (5 cm) high and 1 inch (2.5 cm) wide. This is an ideal birthday gift for kids who are 7-12 years old.

Check Current Price
And that’s the end of my list. I hope you have been able to choose the favorite set for you or for your kids. Also, if you have read carefully, you already know which ones I have chosen, or which ones I already own (the 2 Lego Technic ones). I really like Lego Technic motorbike models. They look very realistic and include nice features, like working steering, an engine with moving pistons or robust tires.